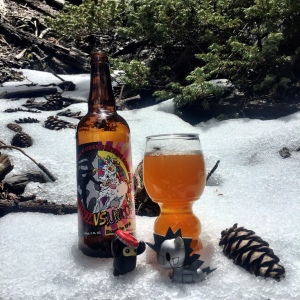 APPEARANCE: I imagine if a ninja’s sword where to chop the head of a Unicorn, he would wipe his blade clean on his ninja pajamas. The color on his ninja costume would be reminiscent of the way this lovely beer poured. A beautiful golden amber, with sparkling highlights that really hypnotize you when you stair into it. Produced a nice big loose white head that lingering cap.

AROMA: Drinking this out in the forest has intensified the pine aromas, all around me the pine cones are falling. Getting tons of sticky pine and huge resinous piney hops coming off the pour. Fresh sliced juicy grapefruit, like the ones on “fruit ninja” game from my iPhone. Followed by some over ripe orange and tangerines. There is a wonderful maltiness that translate into toasted bread and sugar cookies. The nose on this beer is amazing. I imagine this is what a unicorn fart would smell like!

TASTE: After the ninja chopped the head off of this mythical beast, the blood spilled and filled bottle upon bottle of this beer. Usually when a beer has such an outstanding nose the taste doesn’t live up. Not in this case, the flavor layers are all right there in line with the aroma. For a beer that claims 10 ibu it inst a palate wrecker at all,  Its actually very easy drinking. The piney hops come flying at you like a ninja star. Super dank that’s followed up with a big bursting citrus flavor. The sweet malts do make an appearance like a piece of toast with a grapefruit/orange marmalade. There is a some heat on this beer, which is odd with the abv coming in at 8.5%.

MOUTHFEEL: Medium body with a moderate carbonation. there is a very pleasant syrupy creaminess that makes this a really smooth drinking ipa. Lots of that resiouness pine comes through on the mouthfeel, really coating the entire mouth. Leaves the mouth with a long lasting lingering finish.

OVERALL: Not sure if Ninja Vs.Unicorn  is a the name it should have. Its so balanced that it should be called Ninja Sex Unicorn. Huge fan of every aspect of this beer, including the little heat that comes out i’m assuming from the battle. Speaking of battles I think the real winner was me! I just saw that they are going to start canning this beer, when that happens I will be trading for a case at a time. Truly everything I would want and ask for out of a dipa.